I’m not a big fish fan.  Cooked fish, at least; raw is good.  When I think of tuna fish, I can’t help but think of that smelly canned stuff my ex-boyfriend used to eat with a nut tool.  I’ve gambled on seared tuna in restaurants, and been disappointed more times than not.  I like it nearly raw.  It’s usually far too cooked for me, only a small sliver of pink in the middle.  Once it’s grey I want no part of it, TYVM.

Since the sous vide allows for even cooking without overcooking, I decided to try cooking it myself, see if I could keep it from getting too tuna-in-a-can tasting.  Not that I’ve ever actually tasted tuna in a can.

I followed the Anova recipe, for the most part, such as it is:  salt and pepper, into a baggie, add some olive oil, let it sit for a bit, then dunk it into the water bath.  I wasn’t sure what temperature I wanted it at, and went back and forth between 110° and 115°.  I read the comments on the Anova site and on the recipe I found on Serious Eats (which was, honestly, the same basic recipe, just with a lot more information on temp and texture), and finally went for 110°.  The tuna steaks I had were right at an inch, so I let them sit in the bath for 40 minutes.

Once I pulled the tuna out of the water bath, I made a last minute decision to coat them with panko (seasoned with black pepper) before searing.  I also set out some chipotle mayo (closest thing to aioli I have in the house) and a honey orange vinaigrette dressing I made for the salads we had last night.  The chipotle mayo was a bust, but the vinaigrette was nice. 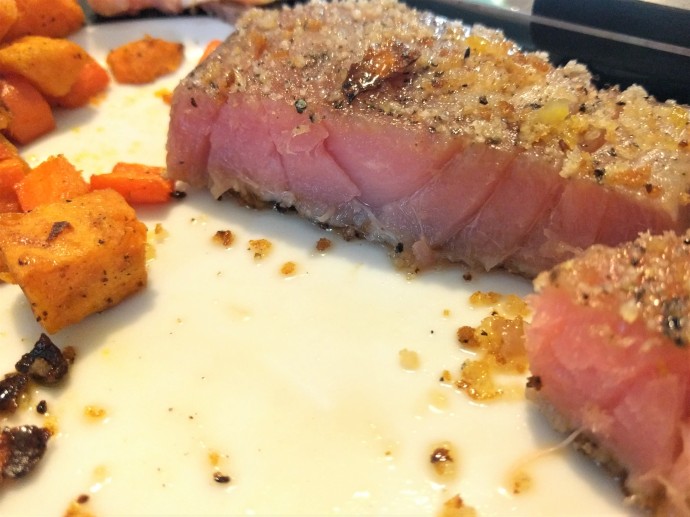 Overall, the tuna looked great, lots of dark pink and very little grey.  I probably could have seared it a bit longer, to be honest (I did about 35 seconds per side).  But the meat was a bit firmer and drier than I would have liked.  Next time I might try dropping the temperature to 108 and cook it for only 35 minutes, then sear for 45 seconds per side.

Because yes, there will be a next time.  I didn’t love it but I didn’t hate it, either – I actually thought it was rather bland (I’ll make sure I have proper aioli next time).  Husband liked it well enough, and (wonder of wonders) The Kid ate some and liked it.  And anything The Kid likes that is not junk food, I’ll add to the rotation.

One of the things I want to blog about this year is our adventures in sous vide cooking.  We were first introduced to sous vide via Modernist Cuisine, which, of course, we lusted over, but the price tag was prohibitive.  But then they came out with Modernist Cuisine at Home, which was more affordable, although still quite expensive.  I bought it for Stephen as a gift while we were in Finland, and we drooled over the photos.  We didn’t have anything in the way of equipment, and we really didn’t want to buy new kitchen equipment while overseas, but there were a few recipes we could do – a low temp steak and a sous vide salmon in the kitchen sink.

The low temp steak was fine, but neither of us saw the real need for it.  The sous vide salmon, on the other hand, turned out well, and we began eating it once or twice a month.  It’s a great introduction to sous vide, because you need no special equipment.  All you need is baggies, a kitchen sink, and a meat thermometer.  The recipe is available online if you are interested in giving it a try yourself.  (I also blogged about it previously here.)

When we moved back to the US last year, an immersion circulator was one of our first purchases – I believe Stephen bought me one for Christmas.  We use the the Anova with wifi/bluetooth capability, and, with only a couple of hitches which we’ve since smoothed out, we’ve been really happy with it.  So much so that we bought my parents one for Christmas this year.

As part of that, I’ve been doing a lot more research, compiling information and recipes to share with my mom.  There are already a bunch of great websites for learning about sous vide, and this site really isn’t meant to be one of them, but I do want to share some experiences here.  So you’ll be seeing posts about sous vide cooking in the future, and if you want to give it a go on your own, let me know!