Our second day in Lapland, we traveled about an hour southwest to the Ranua Zoo. A lot of the animals were sleeping, hiding, or hibernating, but we saw a lot of owls, and the polar bears were great! They seemed to think we had brought them some food in the form of a baby. 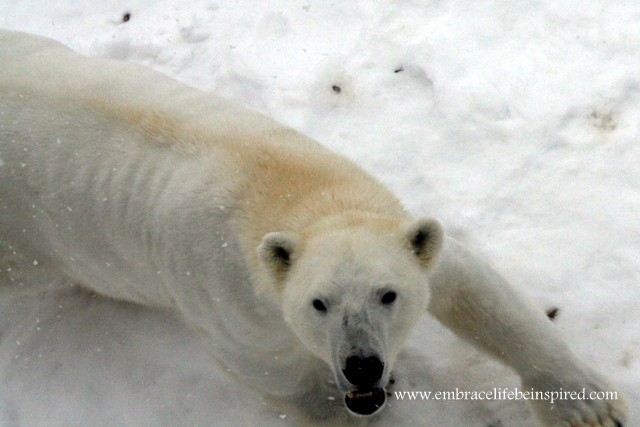 I smell a little baby, Yum! 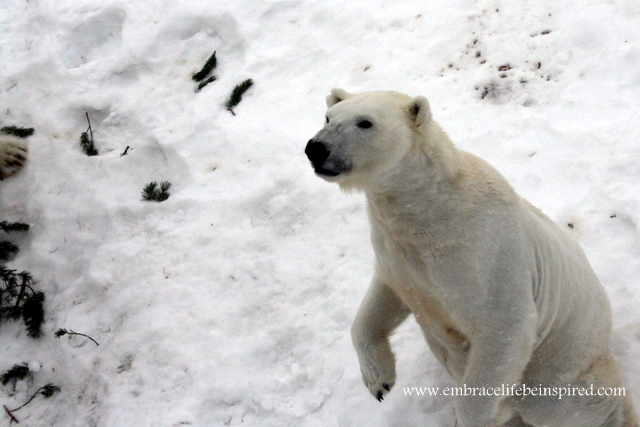 Did you bring me lunch?

“Did someone say lunch?”
“They’re not sharing.”

It was neat seeing polar bears in something close to their natural habitat:

On day 3, we went to a husky park and went dogsledding. We got a brief lesson in driving, including the suggestion that if the sled tips over, to hold onto it, because the dogs will keep going and leave you behind. Stephen drove while I held on to Baby J for dear life – and if the sled had tipped over, I would rather walk than be dragged along by the dogs, TYVM.

While on the trail, our guide stopped to let everyone change drivers (we opted not to), and he pointed up. “Look.”

This is the one photo I didn’t get that I so wish I had. We looked up and saw a crescent sun. Yes, a crescent sun, because where we were, right at the Arctic Circle in Finland, we had an 85-90% solar eclipse happening. It was just cloudy enough that you could look directly at it and see it without, you know, burning your retinas.  It. Was. Awesome.

On Day 4, we went out to Santa Claus Village – Home of the REAL Santa Claus! 😉 We visited with Santa for a bit, and Baby J was fascinated. 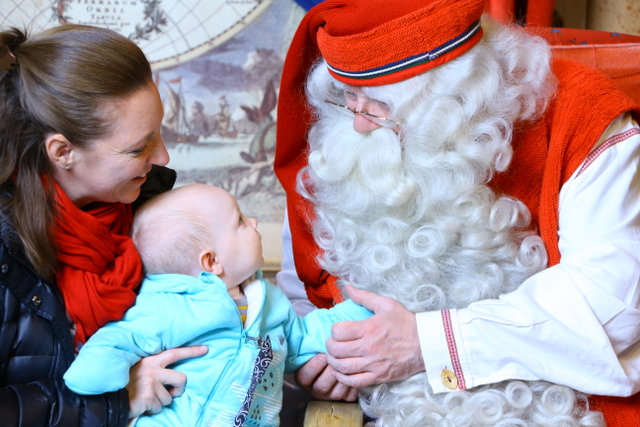 I sent out a few postcards to friends’ kids, letting them know I had met with Santa and he said to tell them hi. We had intended on going on a reindeer ride, but Baby J was sick, so we opted out.

Side note:  If you have kids that you’re trying to break of the pacifier addiction, I thought this was a really neat idea. Have them send the pacifier to the baby elves at Santa’s Village!

We may not have gotten to take a reindeer ride, but that night there was a reindeer race in Rovaniemi! We found a spot to watch from, and I got the camera ready. The first race happened so fast I literally missed it – man those suckers can move!! Was able to catch the second race, though:

Stay tuned for Part 3 of our trip, with photos from the Snow Hotel and more Northern Lights!

Read Part 1 and see my pictures of the Northern Lights!