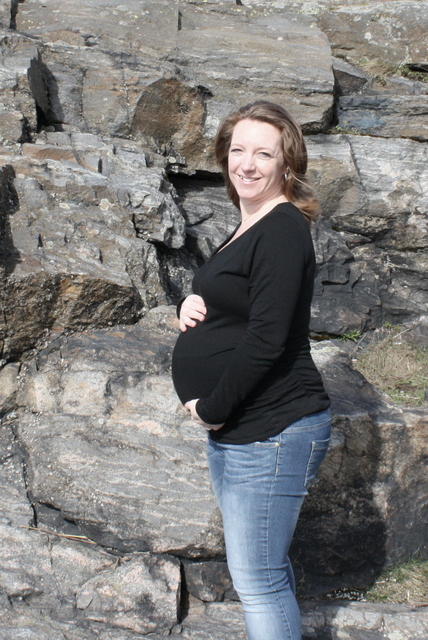 This week is Week 32, which means ideally I can count the number of weeks left on my hands.  I will state here and now, however, that I fully expect this kid to be as late as possible.  Call it a hunch.

Things are going well.  A quick rundown on the pregnancy:

I’ve been working on sewing some burp cloths, but ran into a small bump (er, burp!)  last week.  I’m adjusting my construction plan and hope to get them all sewn up this week.  Stephen doesn’t get it – “You’re making cute things the baby is just going to puke on.”  Well, yeah, but it’s a small thing I can do.  His mother pointed out that I haven’t had the opportunity to do a whole lot of nesting, and I guess she’s right – I guess that’s what this is.  Since we’re in an apartment, overseas, making a nursery seems kind of a waste.  Besides, the baby will more than likely be in the room with us until next February, which is currently the “go home to the US” date.  So, no nursery decorating.  We’re also trying to keep the amount of baby stuff small, for the same reason – the kid won’t need much before 7 months, which is when we’re currently slated to  go home, so why buy a bunch of stuff?  Now if we sign up for another year, we’ll have some serious purchases to make.

The other issue – the one that’s causing me the most stress – is that we’re supposed to be moving apartments soon, but we don’t know when.  We’ve put off buying a bunch of baby stuff, because why buy it then move it?  But I’m getting close to the “baby could come at any time” time, and we don’t even have things like diapers.  We figure even if we find out about a new apartment this week, it’ll still be about a month before we’re in the new place, and that puts me around Week 35.  Week 35, and I don’t have diapers, a car seat, a thing to clean the baby’s nose out, or things I’m going to need postpartum.  Oh, and I want to make a bunch of meals to freeze, but our current freezer is tiny, so I need to wait until we have a bigger freezer.

If I start thinking about it too much, I start really stressing.  Oddly, the fact that we don’t have what we need stresses me out more than the thought of labor and childbirth.  I’m still remarkably calm about that.

We did get the baby box, though!!  Photos to come soon – I finally gave in and started washing the clothes, so once they’re all clean and folded I’ll take a picture.  But that link will show you essentially what I got.  Since I’m not part of the Finnish healthcare system, I had to buy it off someone else.  Still, it’s totally a Finnish experience I want!  🙂

So we’re set on a bed for the baby, we certainly have plenty of clothes to start off with, and really, as long as I don’t have any problems breastfeeding, newborns don’t need a whole lot.  So hopefully we’ll be able to make do – but we still need those diapers and a car seat….

Stephen sent this to me last week, and I got a good giggle out of it:

Baby Translator (may not be SFW)