A drive around Sicily – Part 2

Did you know there are more Greek ruins in Sicily than in Greece?  Crazy, huh?  If you didn’t see Part 1 of our trip, we went to the Neapolis Park in Syracuse, where we saw a still in use Greek Theater and the Ear of Dionysius. That was only the beginning.

On Day 5 of our trip, we went to the Valley of the Temples (Valle dei Templi), located just outside the town of Agrigento, an important city in the ancient Mediterranean world.  The Valley of the Temples, a UNESCO World Heritage site, is an archaeological park that contains the remains of seven Greek Temples dating from the 5th century BC, including the Temple of Concord, which is recognized as one of the best preserved Greek ruin in the world.

Valley of the Temples, looking uphill towards the town of Agrigento

Greek columns in Valley of the Temples 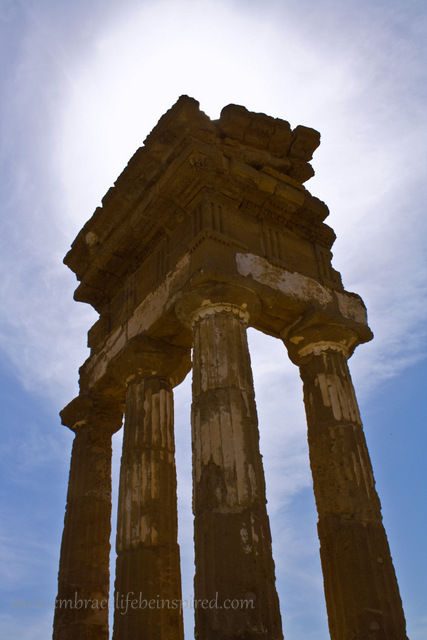 Temple of Castor and Pollux, Valley of the Temples

Temple of Juno, Valley of the Temples

Temple of Concordia, Valley of the Temples

The giant cacti at Valley of the Temples had graffiti all over them. Kind of cool to see at first, but then we saw that the older the graffiti, the more dead that area of the cactus was, which was kind of sad.

Our next stop was Selinunte, founded in the 7th century BC and once the most western of the Greek colonies in Sicily.  The archaeological park here contains 5 temples and the remains of the city walls.  We were actually able to crawl all over most of the ruins here, and being able to touch some of the carvings and walk inside a temple was incredible. 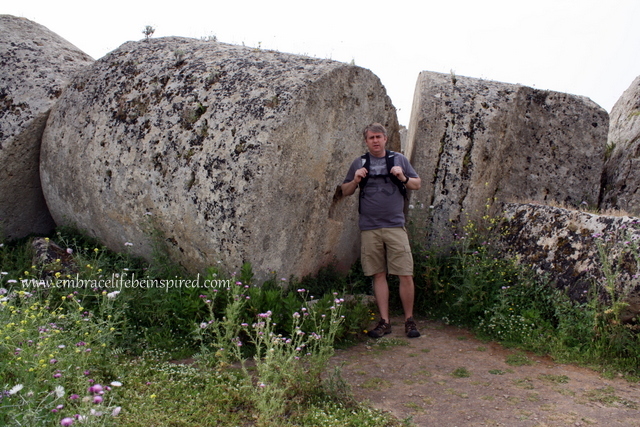 Stephen standing next to a piece of a column – to give you some perspective on size. 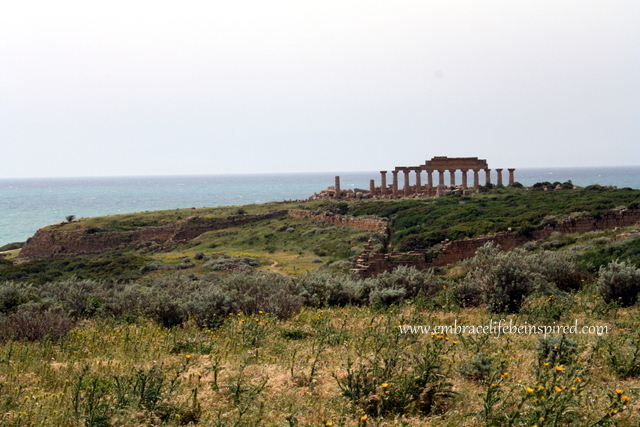 This image would have been on the top of the temple, and we saw similar images in the archaeological museum in Syracuse. To me, it looks very Mayan, which makes me think of the whole collective unconscious idea.

We had some time to spare before we needed to check in to our hotel in Palermo, so we took a small side trip to the medieval town of Erice.  We had gotten an Italian sim card by then, so we mapped the location and set out.  We turned off just before reaching Trapani and started up this…hill.

Seriously you guys, this road was insane.  It was just over a lane wide, but meant for two way traffic.  There were no guardrails, no lane markers, and consisted almost completely of switchbacks.  Some of the turns were so tight, we couldn’t quite make the turn and had to back up a little to get around it.  When you looked down the hill, all you saw was a drop off.  Luckily, most people evidently knew better than to take this road, so there was little traffic – I think only one or two cars passed us heading down.  Oh, and an elderly man on a moped with a dog on the back.  Both of us got a good laugh out of that (wish I could have gotten a picture!).  Once we reached the top, we found out there was a cable car we could have taken up the hill from Trapani…oops! 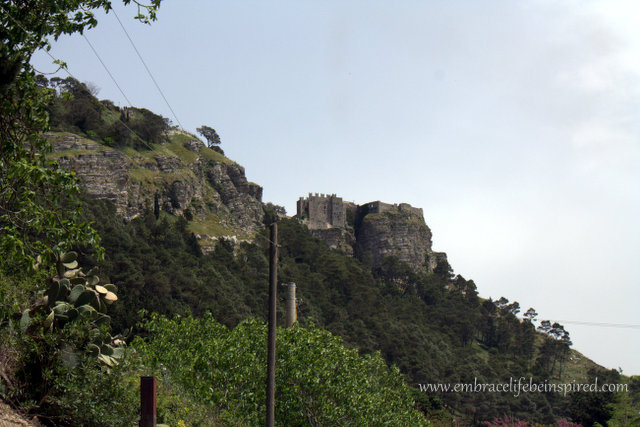 Looking up the hill at Erice

The town has a commanding view over the sea

Torretta Pepoli, built on the hillside under the Balio Towers in Erice

We were smarter when we left Erice, choosing to go down the opposite side of the hill, where the road was wider and there were actually lane markers.  We both breathed much easier.  We arrived in Palermo around 5pm, checked into our hotel, and wandered out to find a place to eat.

And got lost in the wrong part of town.  More on that later.

The next day, May 1, was a holiday, so the only thing I was really interested in seeing in Palermo (the catacombs) were sure to be closed.  Instead of sticking around in Palermo, we went on to our next destination, Milazzo.  It was nice being in a smaller town again, and I’m sure the fact that it was a holiday helped, because the town was ssssllllllooooowwww.  No traffic, no noise – oh, so very nice (I’ve become so spoiled!).

Because it was a holiday, we didn’t do much.  In fact, the main reason we stopped in Milazzo was so we could catch a ferry the next morning to the Aeolian Islands, where we had a kayaking trip booked.

And that will be the next post, because it really, truly deserves its own post.  So stay tuned for Part 3!