It was recently Mardi Gras season, and you know what that means?  King Cake!  In the past, I’ve made “fake” king cake (canned cinnamon rolls formed into a ring), complete with baby, but I’ve always really wanted to make a real King Cake for the season.  Oh, but that required yeast!  And kneading!  So much to get wrong!  However, at this point, I’ve had plenty of yeast and kneading experience, so I was willing to give it a go.  And a gathering of friends just before Fat Tuesday was the perfect opportunity to do so.

First problem, of course, is deciding on which recipe to use.  There are a million versions of King Cake – cream cheese filled, jam filled, raisin filled…oy.  I decided on this recipe, because it seemed somewhat simple.  Except…raisins – Yuck!  I left those out! (Cue my husband’s outrage…)

Second problem – Did you know you can’t find half-and-half in Finland?  The first time I went to the store, I forgot to look up the translation.  I had to go back to the store the next day, checked the Finnish Food Glossary and got the translation:  kermamaito.  But I couldn’t find it at the store.  So I went online and asked around.  And apparently, half-and-half doesn’t exist in Finland.  So I made my own…after deciding which of the four substitute amounts I found online to use.

(Seriously, how the hell would I ever make it here if this was pre-internet?)

So I put it all together, let it rise, and threw it in the oven.  The recipe said for 30 minutes – I wanted to pull it out at 10 because it looked brown enough to me.  I let it go, but I did pull it out 5 minutes early.

Of course, I had to color my own sugar – not my first attempt at that, it was easy enough.  And since I didn’t have a baby (left those in storage), I used a Worther’s Originals toffee.  Hey, beggars, choosers. 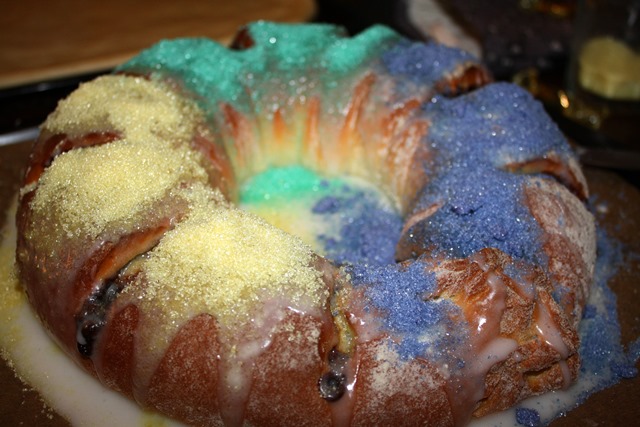 I made King Cake from scratch!