I heard once that your taste in food changes every seven years.  If you used to love licorice, you may now hate it.  If you hate asparagus, maybe one day you’ll love it.  That’s why it’s important to keep trying things, even if you’ve already tried them before.

I used to hate salmon.  I used to hate all fish, actually, except shrimp.  Then I started eating sushi.  And I liked fish as long as it was raw (but I didn’t like raw shrimp).  In fact, raw salmon was my favorite.  But the minute you cooked it, I wanted no part of it.  Then I liked whitefish, like tilapia.  Then I liked lightly smoked salmon.  Then I liked barely cooked salmon.  And even though now, I still say I don’t like salmon, the truth is…I don’t hate it.  I don’t love it, but I can eat it.

So it stands to reason that I’ve never cooked salmon before, right?

The Pioneer Woman shared a recipe of a friend of hers, a simple salmon prepared in the oven.  You put it in a cold oven, turn the oven on, cook it for 25 minutes, and that’s it.  No “bake for 20-30 minutes until done.”  I hate recipes like that.  How am I supposed to know if it’s done?

Back to the salmon.

Since I’ve never cooked salmon before, I’ve also never bought salmon before.  And here I am, in a foreign country, with no clue what the packaging says.  I can pick salmon out of a lineup, but I’m not sure what it is I’m buying.  I’ve bought what I think was smoked salmon, several times, but I’m never sure what kind of smoked salmon.  You know my motto in the grocery store:  “What’s the worst that can happen?”

So I decided this time to go to the fish counter and actually get fresh salmon.  Less chance of getting the wrong thing, right?  But there are several kinds there, and I’m not sure what’s what.  The lady behind the counter speaks a little English, but not enough to communicate.  I ask her for salmon.  She points to two different fillets, one a deeper pink than the other.  I ask what the difference is.  She really can’t tell me, at least in English.  So I just point to the one that’s the size I want and go with it.

What’s the worst that can happen?

It was super easy to make, and it tasted fine.  I’ll make it again, although next time I’ll probably add some lemon and garlic on top.  I might also try to determine what kind of salmon I should get at the store before I go.  That’s always helpful…

Of course, Stephen let me know that he doesn’t like salmon.  But he ate it. 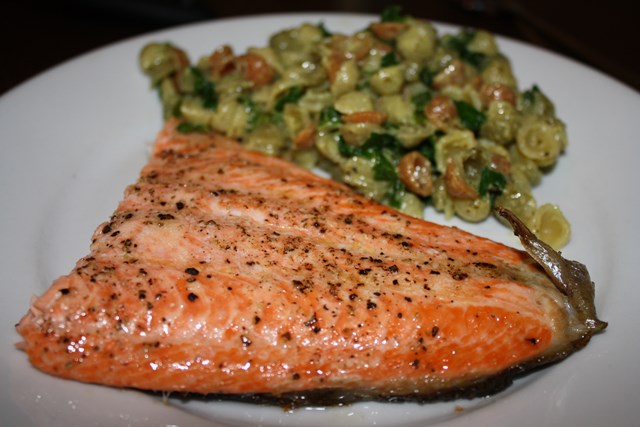 *Update – I made it again with some lemon pepper and lemon slivers on top, and I do think it was just a bit more flavorful.  Regardless, definitely a keeper recipe!