Show of hands – Who knows where Riga is?

Who knows where Latvia is?  🙂

Stephen and I wanted to take a quick long weekend trip this month.  Sounds easier than it is.  Since we live 3 hours from Helsinki, getting to and from the airport and waiting to board is half a day each, which would really cut into the whole idea of a weekend trip.  So I started looking for flights out of Turku, which is just an hour south of us.  The only direct flight I found (we might as well drive to Helsinki, between the flight time and the connecting time) was to Riga, Latvia.  Our other two options were to take the overnight ferry to Stockholm, or just going to Helsinki for the weekend.  I’ll probably be doing Stockholm a couple of times this year, so we said, What the heck, let’s check out Riga!  Latvia is pretty much due south of Finland, across the Baltic sea, a quick and easy 1 hour flight.  Love it.

Riga has an amazing skyline.  As you approach from the west, the various spires of the city rise from the River Daugava.

The historic centre of the city (Vecrīga) is designated a UNESCO World Heritage Site (check one more off my list!) due to it “retaining its medieval and later urban fabric relatively intact” and because of “the quantity of its Art Nouveau/Jugendstil architecture, which is unparalleled anywhere in the world, and it’s 19th century architecture in wood.”  And the Art Nouveau buildings were, indeed, impressive.

A lot of buildings, however, have deteriorated, and green mesh covers a large amount of building facades to keep them from crumbling and falling to the ground.  The buildings need a lot of work, and the trick is finding someone to buy the building who has enough money to renovate and refurbish.

This building had a fire, which destroyed the top floor (you can see some of the destruction through the top floor windows – there’s supposed to be a roof there… 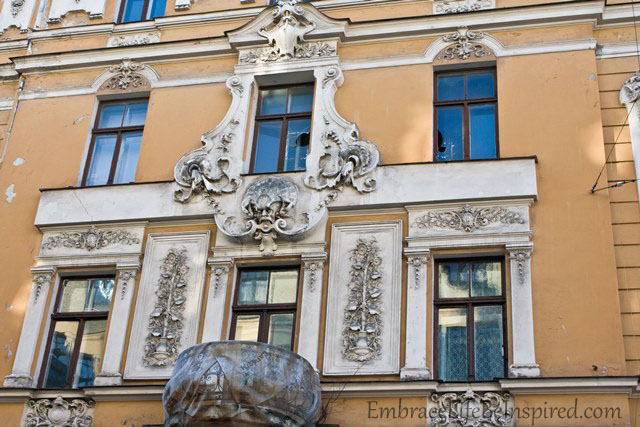 The building also has numerous broken windows and a crumbling facade.

On Sunday, we had a fabulous tour guide who showed us around the Central Market for a food tasting, then took us on a tour of Art Nouveau.  He was Australian, but had lived in Riga for 5 years, and was amazingly knowledgeable about the buildings, history, and lifestyle of Riga and Latvia. 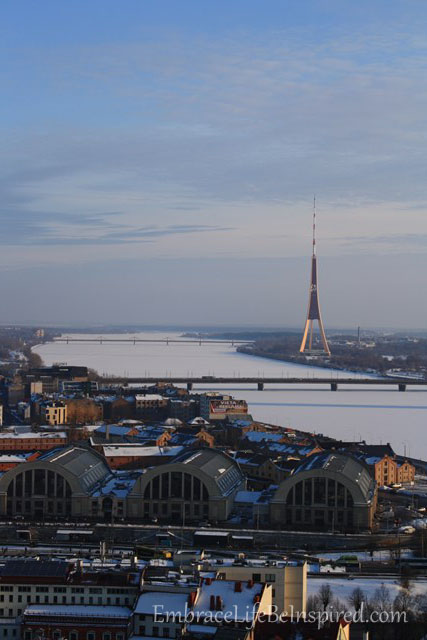 Central Market is in the foreground. These are massive former Zeppelin hangars that have been repurposed to house vendors and goods.

Our Latvian Food Tour included a rundown on what Latvian’s have historically eaten – lots of smoked meats, lots of fish, lots of pickled and preserved food.  Things needed to make it through a frozen winter.  They also use a lot of caraway seed and dill, so we had two lovely cheeses with these ingredients.  And pickled pumpkin!  It was so good!

Before our tour on Sunday, we decided to check out the Latvian Academy of Sciences.  The view from the top floor is supposed to be amazing.  However, even after I checked the hours on the website, we were turned away when we arrived.  We were told it was a winter holiday, but when we told our tour guide that, he had no idea what they were talking about. “There’s still a lot of Soviet era mentality here, and they probably just decided to close for the day, just for the hell of it.” 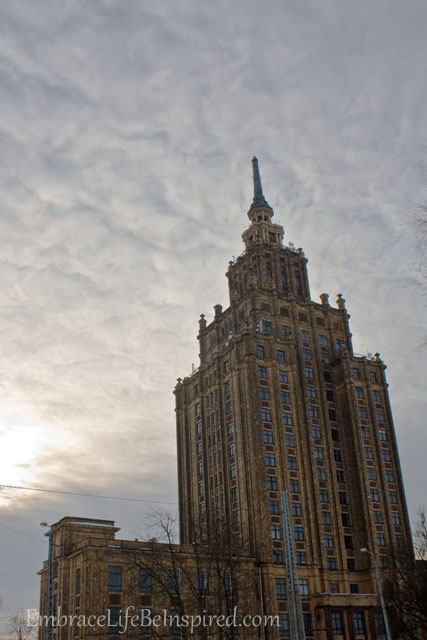 Latvian Academy of Sciences. Both of thought it looked like a mental institution out of a horror movie! 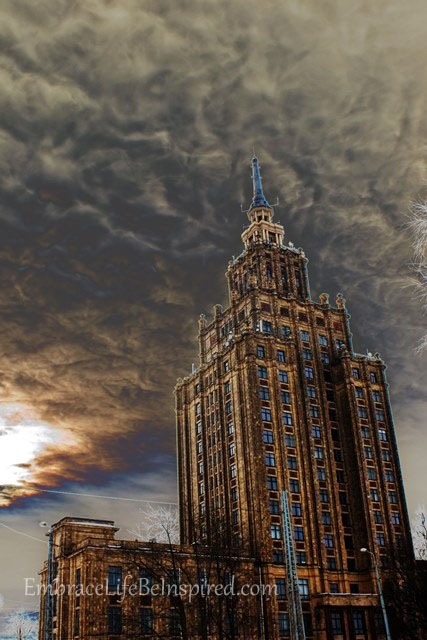 I told Stephen I envisioned boiling clouds and lightning striking the building, for some reason. He said it looked like the building from Ghostbusters, and I think he’s right! So I did some editing to make this a little closer to my vision. 🙂

For dinner Sunday night, we went to 3 Pavāru, a Modern Latvian restaurant recommended by our tour guide.  The food was good, nothing “strange” (I had foie gras and perch, Stephen had fish soup and quail, and we shared creme brulee for dessert), but we both loved the bread course they served us.  They brought the  bread out, then started pouring all these different sauces on what we thought were our placemats.  I’m not usually one for taking pictures of my food, but I found this fascinating:

On Monday, we took the train to Sigulda, a small town about an hour away.  Sigulda is known as the “Switzerland of Latvia” and is home to the bobsled track used for Latvian luge and skeleton training.  We had hoped to pilot our own bobsleigh down the track, but they’re only open to the public on weekends.  Instead, we walked through some of the Guaja River valley and saw some castle ruins.  We also found love padlocks on the bridge over the Guaja River!

Love Padlock on the bridge over the Guaja River

Latvia has a rich and often violent history, and I’ve become completely fascinated with how both Latvia and Estonia lived during Soviet control and how they’ve done since establishing their independence in 1991.  But that’s a post for another day.

Riga Panorama from the top of St Peter’s Church