Big surprise coming:  It gets a little cold in Finland.  Shocking, huh?  After a lovely but mild summer (the average high was in the low 70’s, I think), I felt like I never really, truly got warm.  I dreamed of a sandy beach with a warm sun and laying there all day in my bathing suit with occasional breaks for swimming.  I yearned to be warm.

I started looking at our travel options for traveling to a warm beach in December.  I picked December because it’s the darkest month – the perfect time to seek out some sunlight.  My requirements were a temperature of at least 80F, salt water that was not cold, and a place where I didn’t have to worry about anything, including walking to the bar to get my next drink.

I found that pretty much all of Europe was out of the question – there were parts that may be warm, but there was no guarantee.  I looked at the Maldives and Mauritius, but found most of the resorts to be just a tad out of our price range ($4000/week for hotel).  I did find one affordable, nice looking place in the Maldives, a small B&B type place on one of the non-resort islands that got good reviews, but after investigating it further, I found that alcohol is illegal on that particular island.  Needless to say, that one was definitely crossed off the list!  I figured the best possible solution would be the Canary Islands, but found that even there, the average temp would only be in the mid-70s – not warm enough for what we wanted.  We didn’t really want to fly west, to the Caribbean, because the flight was so long, but the only other option was Africa or the Middle East, which wasn’t really an option for us.

After briefly flirting with the idea of a cruise out of Miami, we ended up booking a trip to Riviera Maya in Mexico.  We did this mainly because we could connect through Dallas, and we could stay there for several days to see Family and Friends and do some shopping.  Plus, it broke up the trip some.  Of course, getting to Dallas still meant a three hour drive to Helsinki, a 2 hour flight to London, a 4 hour layover in London, and a 10 hour flight to Dallas.  (Quiz:  What’s the best part of a 10 hour flight?  The part where the pilot comes on and says, “We’ll be landing in less than 15 minutes.”)

While in Dallas, we ate Mexican food almost exclusively, with a break for one night of sushi for me.  We had a big party, did an early Christmas, stocked up on jeans and OTC meds and Twizzlers, and celebrated our 1 year wedding anniversary with dinner at Ruth’s Chris.  The weather in Dallas was great, in the 80s and sunny, and it was so nice to be warm!

Then, on to Mexico, where we stayed at an all-inclusive resort south of Playa del Carmen.

The resort was nice enough, and we enjoyed our stay.  The food was mostly so-so (the sushi was laugh-worthy, tiny pieces of fish on my nigiri), but the drinks were fruity and cold and they kept coming.  The resort didn’t actually have a beach – instead, it had a lagoon area.  We figured it would work out well enough – the water was still sea water, and it was on the coast, it was just that there was a natural sea wall of sorts that made the sea inaccessible.  However, we did miss having a real beach, so we know better for next time.  The room was nice, with a large shower and a whirlpool bathtub built for two that faced out onto the patio (which had a hammock – nice touch).

Part of the lagoon at the resort. 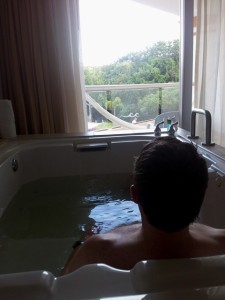 “Well, color me happy, there’s a bathtub in here for two!” (Movie paraphrase, anyone?) Since we don’t have a bathtub at home, I tend to actually use them when we travel, just for the luxury!

It was a great trip, and I got the warmth and sunlight I so desired.  Of course, it had to end at some point, right?  For us it ended at 7am Monday morning, at which point we spent the next 30 hours traveling.  (This is why we will not be flying home at all next year, the travel is just killer.)  When we left Finland, it was literally during blizzard conditions, and I think it snowed the entire time we were gone. We arrived in Helsinki to a car buried in snow, then had a small mishap on the drive home and ended up spending about an hour in a snowy ditch.  I was worried about the car battery after sitting in the freezing temperatures for almost two weeks, but it started up without a problem three times during our trip home…then died when we tried to move it out of the loading zone at the apartment.  It got us home, though, and we’re grateful for that!

There were wild spider monkeys on the grounds of the resort. If you look just above the curve in the branch at the middle of the picture, you can see the monkey’s face.

Monkeys! They were so adorable!!