Since I knew we wouldn’t get to Mont Saint Michel very early, I wanted to arrive late, after 4pm as Rick Steves suggests.  So we stopped in Caen along the way and visited the Memorial Museum for Peace.  I didn’t take any photos while I was there.  It didn’t seem right, somehow.  And I know this might be an unpopular opinion, but I didn’t like the museum.  That’s not to say it’s not incredibly educational and well put together – it absolutely is.  This  is a must see for WWII buffs, and it’s very educational – we saw several school groups there, and I think the museum did a very good job of putting all the information together in a wonderful way.

The drive through Western Normandy was spectacular – I absolutely loved the countryside.  Rolling hills, towns nestled in valleys or on hillsides, wind turbines and cows and poppies along the roadside – it was beautiful.  I took some photos from the car, but of course, they don’t do it justice. 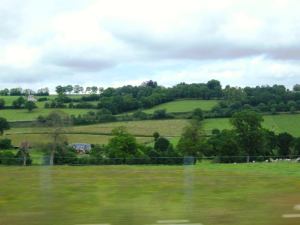 Mont Saint Michel – wow.  Wowie-wow-wow.  We caught a glimpse of it from 10 miles away – floating “like a mirage on the horizon,” indeed.  I took entirely too many pictures, but here are just a few: 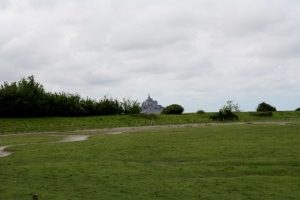 Mont Saint Michel from a distance

Mont Saint Michel – through the poppies! (For those that don’t know, I love poppies!)

We bypassed the main street and went up along the ramparts, as suggested. Glad we did – we missed the crowds and the kitschy shops. This is looking down on the main street-

I was captivated by the mud flats surrounding Mont Saint Michel.

On top of Mont Saint Michel, looking down to the mud flats

Saint Michael at the top of Mont Saint Michel 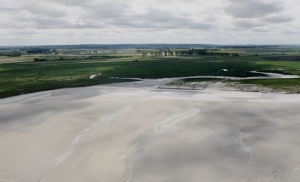 Looking out from Mont Saint Michel over the mud flats and the reclaimed, salty pastureland

It was absolutely gorgeous, and I definitely recommend you visit!