After about 15 hours of travel, including a four hour layover in Frankfurt, we arrived in Helsinki.  We decided it would be best to check into a hotel rather than drive to Rauma that night, because neither of us slept much on the planes, so we picked up our rental car and headed outside.

Ouch.  Seriously, ouch.  Bundled up, I wasn’t too terribly cold, but it hurt to inhale.  Like ice crystals in your lungs.  Exhaling, I figured out that was probably an accurate description – I swear my breath was freezing in mid-air.  I believe it was -15C when we arrived.

We drove to the hotel…with a few wrong turns.  It took me a while to figure out the road labeling.  I totally understand what the people on The Amazing Race feel like now, having to navigate in a foreign language.

We checked into the hotel – at 135€ a night.  The hotel room was comical – the bathroom even more so.  I knew European hotel rooms were smaller, and that they had twin beds, but this room was smaller than the cabin I had on the cruise I went on a couple of years ago.  And the bathroom…my goodness.  I didn’t know the definition of the word “miniscule” until I tried to shower in that thing.  And, seriously, the twin beds were one thing, but there was a floating nightstand between the two beds, making cuddling absolutely impossible.  One wrong rollover in the middle of the night, and you’d have a concussion.

The teensy hotel room in Helsinki - from the front door, there was the length of the couch and the width of two beds. 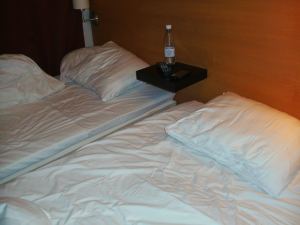 The floating nightstand between the two beds - to ensure absolutely no touching or hanky-panky of any kind.

We got up this morning (to -25C) and had breakfast, then drove on to Rauma…with only a couple of wrong turns.  The countryside was lovely, snow-covered fields and forests.  I got a giggle out of the snow ensconced hay bales – I wish I had gotten a picture of those.

Checking into our hotel room in Rauma, I feared the worst.  We will be living here for 3-4 weeks, and there was no way I could live in a hotel room the size of last night’s for more than 3 days.  The elevator was tiny – barely big enough for me and two of our bags, so I went up first.  And then couldn’t figure out how to open the door.  So I ended up riding back down, surprising Stephen when he opened the door.

“I couldn’t figure out how to open the door,” I said, embarrassed.  Then it dawned on me.  “Do I just push?”

We unlocked the door and I held my breath.  But luckily, it was bigger.  A sitting room with a couch and chair, with plenty of floor space, and a bedroom (with two twin beds).  I checked the bathroom.  I think it might be the size of the entire room we were in last night.  I checked the shower.  Standard standing shower.  Not huge, but big enough so you’re not touching any walls as you move around.  Thank god!!

Our home for the next few weeks - sitting room, with a bedroom behind it. 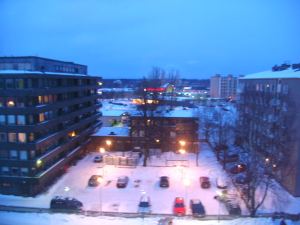 The view from our hotel room on the 6th floor.

We settled in, unpacking suitcases and getting acquainted with the room, then headed out to find some lunch.

After walking around a bit, trying to decipher signs for a restaurant, we ended up seeing a sign for Pizzat (there’s a lot of those here – we had probably already passed three).  I felt like it was cheating somewhat, not truly “experiencing” Finland, but we were cold and needed to eat.  It ended up being a kebab/pizza place, so I ordered some sort of Greek/Turkish chicken platter, and Stephen had a wrap with some grilled meat.  It was very good, but ohmygosh, the fries!  I can’t believe I’m about to rave about fries, but these were wonderful!  Crinkle cut, with a dollop of some sort of red oily sauce on them.  The flavor of the fries was great, but the fries with the sauce?  Holy-crap-good.  I’m thinking it might be the oil they fry them in, and I’m sure part of it is the seasoning.

So, that was about it today.  Some general impressions/observations:

Okay, so not many “pretty” pictures of Finland, I know.  I’ll work on more tomorrow – today was a matter of figuring out how to manage coordination with huge gloves and a scarf doubling as a headcovering that kept falling off.  I’ll do better tomorrow.  Until then… 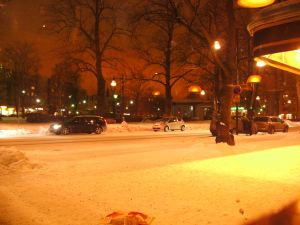